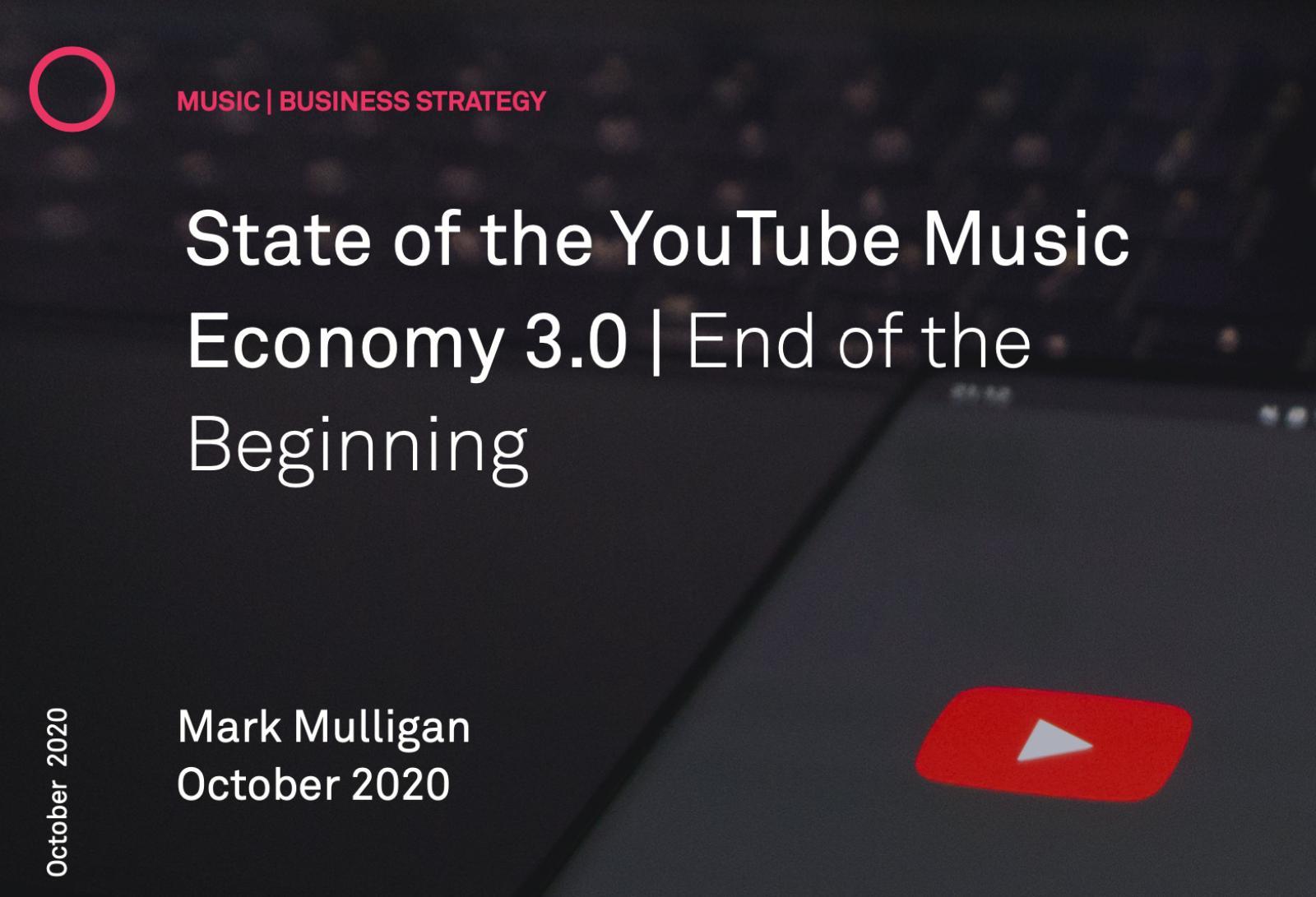 YouTube just announced its milestone of reaching two billion music users on the platform. YouTube has long been the largest music service on the planet, and it has just extended that lead. In 2019, its official total user number was two billion. Lockdown has proven to be a growth driver of epic proportions.

Nicely timed to (accidentally!) coincide with YouTube’s announcement is third edition of MIDiA’s biannual ‘State of the YouTube Music Economy’ report. This report, which provides a detailed analysis of YouTube’s contribution to the music business, put YouTube’s music user number at 1.2 billion for the end of 2019. Of course, all this comes at a time when European legislators are discussing how Article 17 of the European Copyright Directive will be implemented and therefore impact YouTube’s business (potentially a very convenient time to release a stat of this magnitude?). 2020 has proven to be a big year for YouTube – but equally, make no mistake: YouTube and music rightsholders are still not on the same page.

One of the biggest issues regarding the YouTube music economy is that music, while performing and growing strongly, still underperforms commercially compared to other content genres on the platform. This is because music videos are not as well suited to YouTube’s monetisation mechanics as genres such as games. For example, the videos are too short to have mid-roll video ads and most music channels (Asian and Latin American ones excepted) are artist-centric, so simply do not have enough content to drive channel engagement. While there are constraints on what can be done with a music video, there is nonetheless a lot of scope for innovation and increasing music’s share of YouTube revenue. 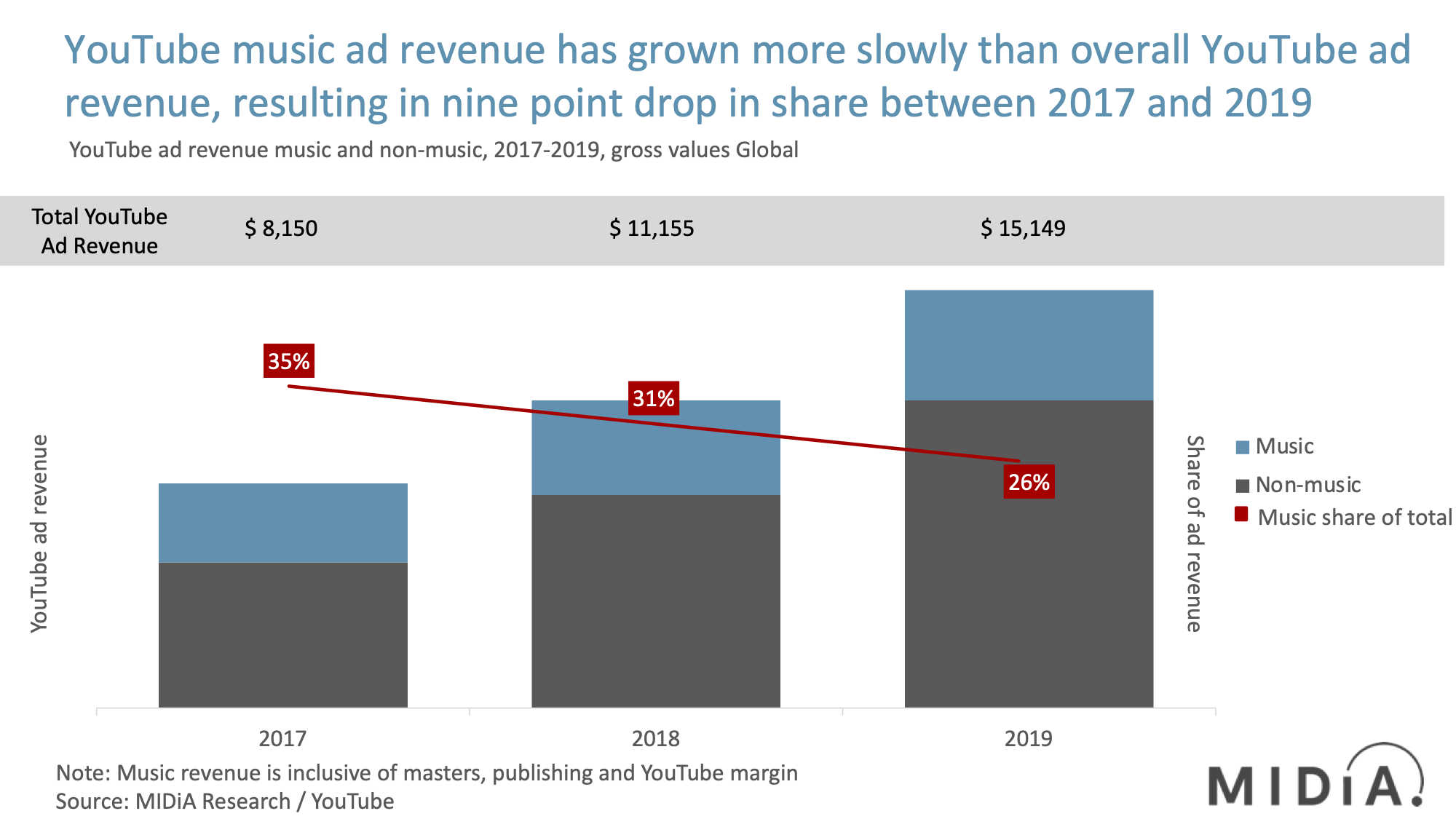 Google is now the second largest global payer of music royalties, with $5.2 billion across free and paid as well as masters and publishing. Spotify is comfortably ahead, but the scale of Google’s royalty contribution is pronounced.

In 2019, YouTube generated $15.2 billion in ad revenue with $4 billion of that music related (this figure includes income for labels, publishers and YouTube etc.). While that was an impressive increase of 18% on 2019 it was much slower than the 36% growth in overall ad revenue. Consequently, music’s share fell from 31% to 26%. Music rightsholders might point to this being evidence of YouTube not paying enough for music, but it pays pretty much the same revenue share to all of its creators. So, there is clearly more that music can be doing to ensure that it can grow at a rate closer to that of other content genres.

Currently, YouTube is becoming more important to music than music is to YouTube. The one billion views club is becoming the de facto Platinum ‘sales’ award for the streaming era, and there are now 208 music videos that have reached the milestone with 74 videos reaching it in 2019/20 alone. YouTube continues to dominate the global music streaming market, with 47% music weekly active user penetration, ahead of Spotify in second place at 29%. Being the most widely used music streaming app across all ages, with weekly active usage highest among 16-19 year olds at 70% penetration, YouTube is simultaneously a key ad-supported, premium, marketing and discovery asset for artists and labels. Against this setting, the debate around rights holder royalty rates continues to rage.

by Mark Mulligan
23 Oct 2020
In the coming weeks MIDiA will be presenting the third edition of its biannual YouTube music report, State of the YouTube Music Economy 3.0: End of the Beginning. This is a major report that presents the...

by Karol Severin
16 Oct 2020
With both PS5 and Xbox Series X having sold out their pre-order stock, the winter holiday race is heating up. Following Microsoft’s acquisition of ZeniMax Media, we wrote that the acquisition is unlikely...
No thanks