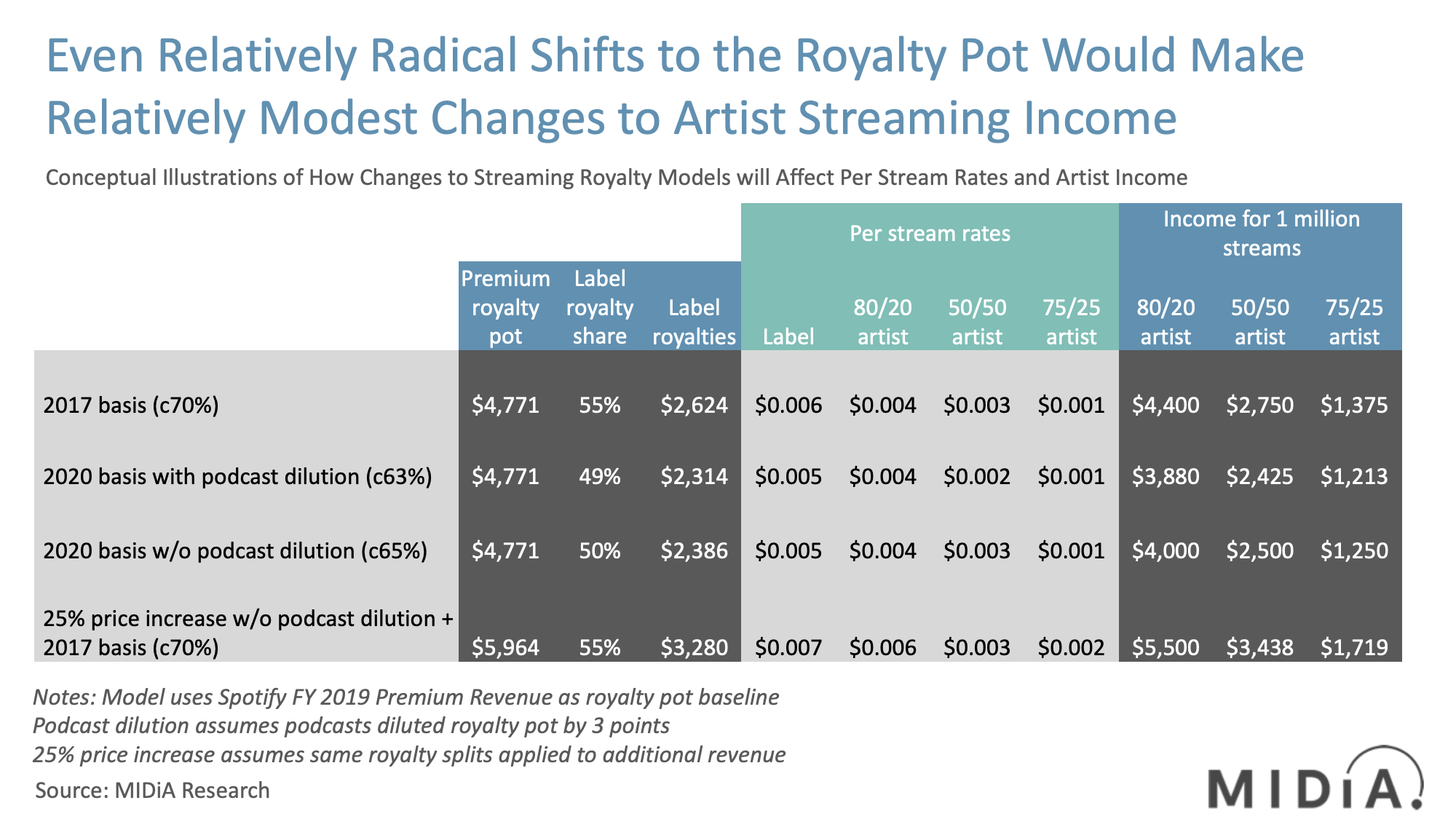 There is an existential debate going on at the moment, around whether streaming is paying artists enough. It may feel like a rerun of old debates but it is catalysed by COVID-19 decimating artist income. These are some of the key narratives: here, here and here.

In this piece I lay out the underlying economics of the argument. I also focus wholly on artist income as songwriter income is another topic entirely.

COVID-19 has reset the debate

The latest streaming royalty debate is not an isolated event. It is happening because COVID-19 has decimated live income, leaving many artists worrying about how to make ends meet. Last week, just before this whole debate kicked into gear I wrote:

“Live’s lockdown lag may have the knock-on effect of making artists take a more critical view of their streaming income. When live dominated their income mix, streaming’s context was a meaningful revenue stream that built audiences to drive other forms of income. It was effectively marketing artists got paid for. Now that artists are becoming more dependent on streaming income, the old concerns about whether they are getting paid enough will likely come back to the fore. It is in the interests of both labels and streaming services, that labels use this as an opportunity to revisit their streaming splits with artists. Labels cannot afford to have artists united against the labels’ primary income stream.”

None of this makes the debate any less important, but it explains why it is happening now, and with live revenue potentially set to take years to fully recover, it is a reality that streaming services and labels need to adjust to. It is in the interests of both labels and streaming services that artists feel like they are being treated fairly. But it is crucial that this debate is grounded in a firm understanding of streaming economics and that we do not return to the mudslinging of more than half a decade ago. A debate which, by the way, did not result in any fundamental change to how artist royalties are paid and was eventually followed by labels negotiating smaller revenue shares with Spotify and others.

Where streaming has got us to

Streaming has been the change agent that turned around 15 years of decline. But it also completely reframed artist income from recorded music. In the old sales model artists would get a large sum of money in a relatively short period of time. Streaming income is more like an annuity, a longer-term return where the music keeps paying long after release. In the old model artists had smaller but high-spending audiences. With streaming they have larger but lower-value audiences.

For example, a recouped independent artist might expect to earn $4,500 for selling 1,500 copies of an album. That is roughly how much an artist would get from 5,000 people streaming the album 20 times each. The average revenue per user (ARPU) has gone from $3.00 to $0.90 for streaming. The artist has traded ARPU for reach.

This model worked fine when live and merch were booming because more than three times as many monetised fans meant three times more opportunity for selling tickets and t-shirts. This of course is the ‘exposure’ argument streaming services are fond of, which works until it does not. Now that live and merch have collapsed, as the trope goes ‘exposure does not pay the rent’. The previously interconnected, interdependent model has become decoupled.

Put simply, artist streaming economics do not work without live.

The question is: what levers can actually be pulled and what effect can they have? In the above chart I have used Spotify’s 2019 premium revenues to illustrate how changes in royalty shares can impact what artists earn. I have used a total per stream rate of $0.06 as the base case, which could look on the high side for some artists, but the purpose is to show the relative change. Whatever amount the base rate is, it will increase by the same percentages.

The tl;dr of the chart is the most radical of the options (label rate returns to 55%, podcast dilution is removed from the royalty pot, a 25% increase in retail price and therefore royalties) results in a very meaningful uplift of 42% in royalties for artists from today’s current state. But, the three problems here are:

1) Spotify lost $184 million in 2019. With this royalty model it would have lost more than $1 billion. Spotify would have to reduce its operating costs by a fifth just to get back to losing $184 million. Critics would argue this represents trimming the fat. It might, but it would also likely lead to Spotify:

None of these are reasons not to pursue the strategy but they are prices that labels and artists have to be willing to take. Spotify revenue growth will slow. Furthermore, it will skew the market towards Apple, Amazon and Google who can afford to make music loss leading. In the mid term this may benefit artists, but in the longer term (i.e. when Spotify is sufficiently squeezed) these tech majors are likely to follow their MO of ‘reducing inefficiencies in the supply chain’. So be careful what you wish for.

2) Taking an artist , with 20% of her total income coming from streaming, if live and merch only gets to 25% of its previous level, the 41% increase in streaming income would still see her total annual income fall by 40%.

No streaming lever can be pulled hard enough to offset the decline in live revenue.

So, let’s pull together all the pieces:

There is not a simple, single answer to fixing the current crisis in artist income. A blended, pragmatic solution would be:

It is not going to be easy for artists for some time yet. The hard truth is that income levels will not return to full strength until live does, and that is a way off yet. Streaming is more important now than ever so any solution must balance maintaining its momentum and scale with sustaining artist careers.

by Mark Mulligan
16 Jun 2020
Tencent’s combined  $200 million investment in WMG  follows on the heels of its $3.6 billion joint investment in Universal Music. It is hardly Tencent’s first investments in music, having spent $6.2...

by Karol Severin
2 Jun 2020
Sony , EA , and Activision were among companies to postpone marketing events and product release efforts in light of the current protests against police brutality and racism in the United States. The current...
No thanks