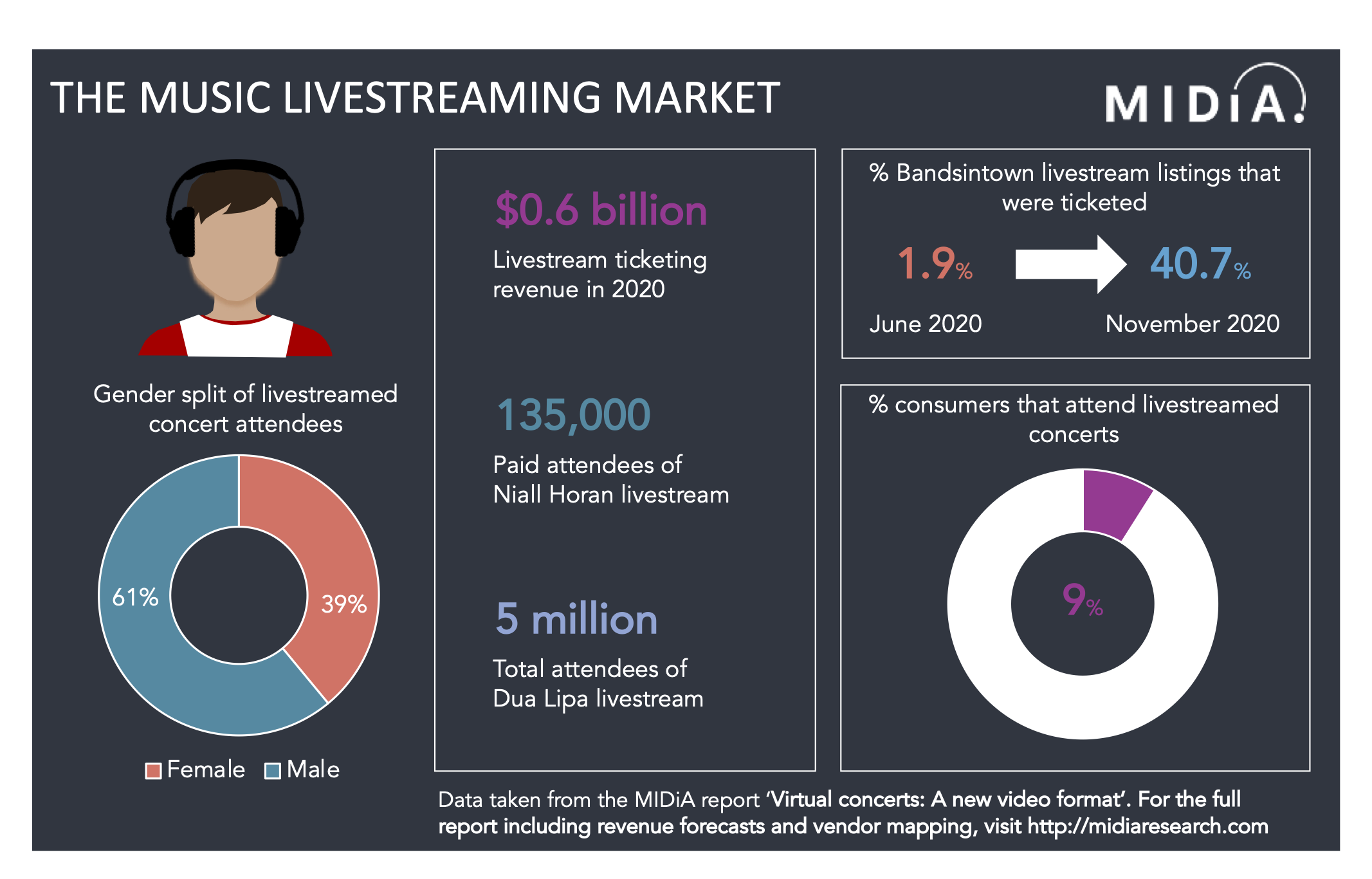 The global pandemic thrust the live music sector into chaos, with global revenues falling by 75% in 2020 compared to one year previously. The music industry was rocked by first-order impacts (no concerts, no fan engagement) and second-order impacts (many artists realising that streaming did not add up without live income alongside it). Necessity, though, is the mother of invention and an unprecedented period of innovation and experimentation followed, creating a whole new virtual concert ecosystem. One that presents great opportunity, but that also reflects the flaws of a hastily constructed industry – flaws that must be fixed for the sector to realise its ambition. Rather than the future of live, virtual concerts represent an entire new video format.

MIDiA’s new report ‘Virtual concerts: A new video format’ provides a comprehensive overview of the market with revenues, forecasts, demographics, vendor mapping and industry metrics. The report is immediately available to MIDiA clients. Here are some of the key findings.

Live streaming of concerts is not new, but the combination of a complex rights landscape and resistance from the traditional live sector stymied the sector’s growth. The fact that technology itself was not the problem is well illustrated by the dynamic growth in live streaming in other content verticals, gaming especially. Since the pandemic’s first impact, there has been a rapid rollout of new live music streaming solutions and companies, enjoying varied success both commercially and creatively. Nonetheless, artists now have a vast array of options at their disposal and the rapid shift is well illustrated by the Foo Fighters’ Dave Grohl joking during his band’s December 2020 high quality, ticketed live streamed concert that the sector had come a long way from artists playing piano in their living rooms earlier in the year.

One of the most important changes was the strong shift in the latter part of the year from free streams to more professionally produced, ticketed events. From June to November 2020, the share of live-streamed concert listings on Bandsintown grew from 1.9% to 40.7%, while the total ticketed revenue in December was up 292% from June. The shift to paid is crucial, especially considering the #brokenrecord debate (arguably the most important second-order impact of the cessation of live music). Traditional live is a scarce, premium product that generates many artists the bulk of their income. Yet the start of the live streaming boom was all about free, an uncanny rerun of when music first went on the internet. With the current wave of COVID-19 worse in many countries than the first, 2021 is set to be another highly disrupted year for the live sector. It is crucial that live streaming can pick up some of the slack as a meaningful revenue driver for artists.

Overall, ticketed live-streamed concerts generated $0.6 billion in 2020 with a flurry of ticketed events in the last two months of the year, including end-of-year spectaculars from heavyweights as diverse as Justin Bieber and Kiss.

Live streaming though has a long way to go, illustrated by the fact that penetration is just 9% and audiences have an early adopter, younger male skew. In many respects live streaming was not ready for primetime when COVID-19 hit. Unlike sectors such as video conferencing and home fitness tech, which had become well established before, music live streaming was a bit of an industry backwater. A whole host of new entrants swept in to tap the new opportunity, while pre-existing ones that had been limping along pre-COVID, gave themselves a new lick of paint.

The vendor landscape is complex and increasingly fragmented. But most importantly, it is characterised by companies wanting to own as much of the value chain as possible and trying to achieve as much as they can before the giants of the traditional live sector get back on their feet.

Live streaming has vast potential – not in some binary live music replacement equation, but instead as a new video format. In fact, live streaming could be to live music what pay-TV is to sports, creating in the long run a market that is even bigger than the core business. But between now and then there is a lot of hard work to be done.

by Hanna Kahlert
16 Nov 2020
Virtual reality – or “VR” – has been described as a potentially media transforming technology for years now . Desperate trend seekers have long harked its “potential”, certain that this little-understood,...

by Keith Jopling
28 Oct 2020
In our recent report The Rising Power of UGC , in association with Audible Magic we identified that the music industry could unlock as much as $6 billion in revenues from UGC by 2022. Such an outcome would...

Brent Chamberlain
10 Jan 2021
The best format I have seen is Rhett Miller on stageit.com which has a minimum “ticket” price of 10 cents but rewards high “tippers” with the chance to request a song and hear their name thanked by Rhett. The high tipper is typically over $100 so I estimate Rhett is pulling down about $1,000 per show. The key is this allows anyone and everyone to enjoy the show without breaking the bank of those who can’t afford it.
Sterre
8 Jan 2021
Interesting report - would love to see some of these new players included in the data though. From what I can tell, most data relies on that provided by big players (Driift working with Ticketmaster's Universe, YouTube, Amazon, MelodyVR, Twitch are all not the smallest companies) when you ironically mention in this blogpost that it is actually very interesting to see what new players can establish themselves now in this new domain. What about Veeps - who ended up hosting the biggest male solo livestream of the year (160.000 tickets sold for Louis Tomlinson)? Or BTS' livestream (biggest livestream overall) which was streamed via VLive? Did you incorporate that into the analysis or is that excluded from the report altogether?
Tory
8 Jan 2021
Thank you for the helpful infographic and commentary. In my industry advertisers are not yet seeing the value of livestreaming as a content platform. Many successful brand integrations/sponsorships and pre-roll ads are on the horizon as the sector grows. One I think will be here to stay as complementary music platform to the return of live events.
No thanks