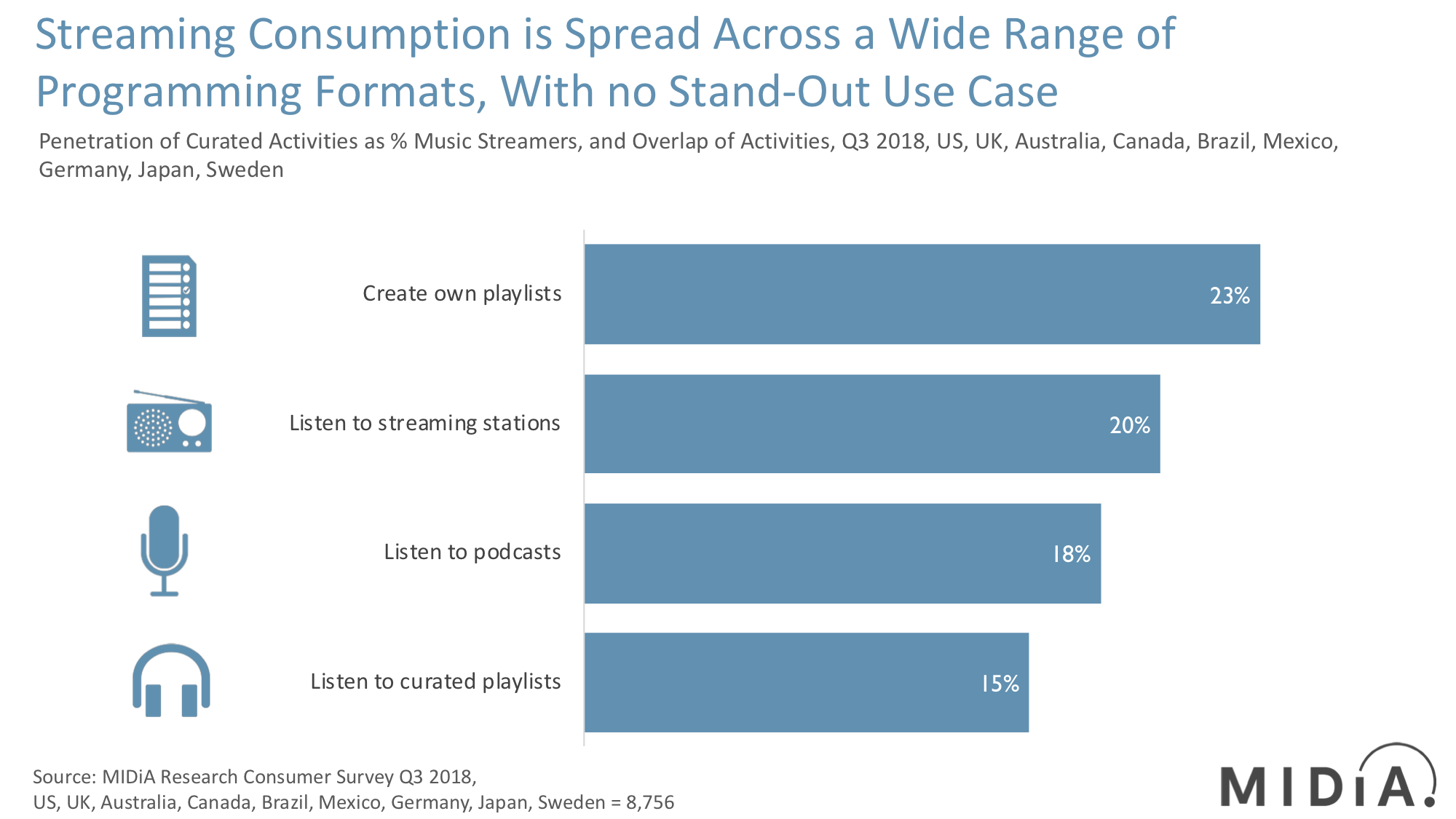 Spotify has launched a radio-like feature set for premium subscribers in the US called Your Daily Drive.Although it is only positioned as a playlist, the content mix includes podcast news content and plays music the listener already likes with a sprinkling of new tracks. This might not sound that special, but this ‘recurrent heavy’, news-anchored programming is Spotify taking the essence of US drive time radio and translating it into a playlist. As we wrote back in early 2018, radio is streaming’s next frontier, and nowhere is that more true than in the US.

Right now, streaming consumption is fragmented across multiple programming formats with no stand-out use case. Curated playlists are not for music what binge watching is for video. While this is positive in the context of multiple use cases being met within an increasingly diverse user base, if streaming is ever going to seriously challenge the mainstream mass-market audience that is radio, it needs a binge watching equivalent. Streaming needs a simple, easy to understand and access format that translates seamlessly to traditional radio audiences. Your Daily Drive is a very small first step on that journey.

The playlist is now just a delivery vehicle

If we were to rewind just a few years ago, the idea of Spotify delivering drive-optimized playlists interspersed with news may not have sounded totally outlandish but it would nonetheless have only felt a distant possibility. But now that Spotify has extensive podcast capabilities under its belt and a very proven willingness to insert podcasts throughout the music user’s experience, the concept of what constitutes a playlist needs rethinking entirely…largely because that is exactly what Spotify has just done. The industry needs to start thinking about playlists not as a collection of music tracks but instead as a targeted, personalized and programmed delivery vehicle for any combination of content. In old world parlance you might call it a ‘channel’, but that does not do justice to the vast personalization and targeting capabilities that playlists, and Spotify’s playlists in particular, can offer.

In this context, Your Daily Drive is not simply a playlist but instead Spotify’s first foray into next-generation radio broadcasting. There will doubtless be further Spotify playlist announcements over the coming months that leverage podcast content. As with Your Daily Drive, they won’t just be playlists; instead, pay attention to what they are aiming to compete with to understand their true intent.

Radio programming itself will take a long time for Spotify to master – just look how long it is taking Apple. Even when it does, the even bigger challenge is monetisation. Ad-supported revenue simply isn’t growing fast enough, and the Q1 earnings (which recognized the revenue of its new podcast companies) did not indicate that podcasts were going to bring a big bump anytime soon either. To compete with radio in a meaningful way, Spotify will have to invest heavily in ad sales and ad tech to the same extent that Pandora has. That means having people pounding the streets, knocking on the doors of mom and pop stores selling local spot ads, through to competing with Google, Facebook and Amazon to deliver world class ad tech. No small task, but the rewards could be huge.