Spotify Q4 2018: Solid Growth With a Hint of Profitability But Longer Term Questions 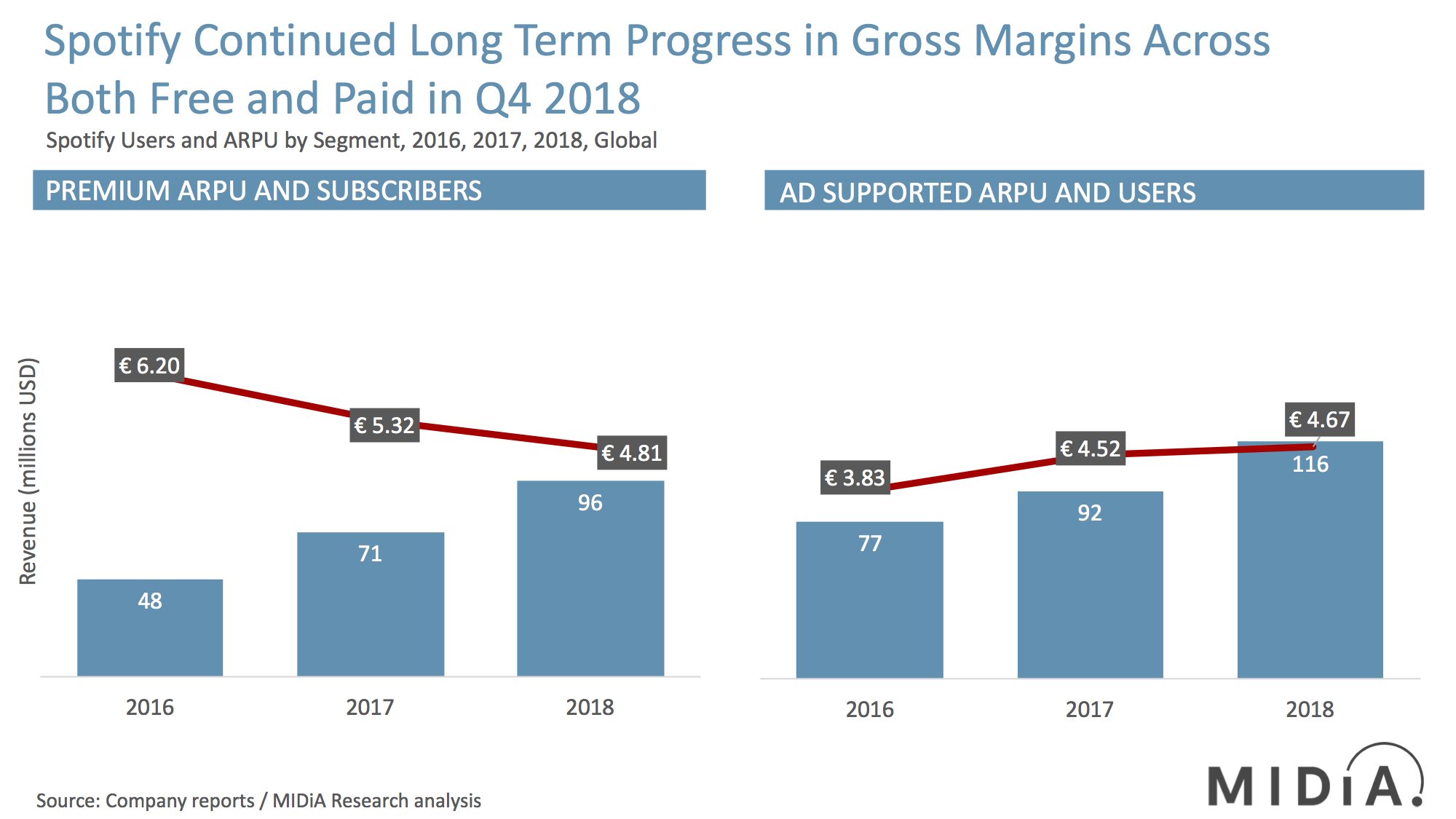 Spotify finished 2018 strongly, over performing in both subscriber and ad supported MAU additions. This was accompanied by Spotify’s first ever profitable quarter and two major podcast acquisitions early in 2019 hinting at a positive year ahead. However, at the same time premium ARPU continues a long term decline - the price Spotify is paying for maintaining global subscriber market share.

Spotify hit just over 96 million subscribers which was an increase of 36% from 71 million in Q4 17. The addition of nine million net new subscribers in Q4 18 was the same amount of subscribers added one year previously. However, while the Q4 17 increase represented 15% growth in Q4 18 the rate was 10%. Relative growth is slowing as the market matures.

Spotify is growing its subscriber base markedly more quickly than it is growing its premium revenue, resulting in declining ARPU. Although subscribers hit 96 million at the end of 2018, premium ARPU declined from €6.20 in 2016 to €4.81 in 2018, a fall of 22%. Over the same period ad supported ARPU followed a mirror opposite trend, growing +22% from €0.96 to €1.17. Spotify routinely explains in its earnings that trials and family plan adoption are driving down ARPU. However, this is not a secular trend but instead a Spotify trend. In retail terms, global music subscriber ARPU actually grew 3.5%. Spotify slightly increased its global subscriber market share in 2018, up to 36.2% from 35.8% in 2017, but it is clearly having to aggressively discount pricing to do so.

While ad supported ARPU was up, ad supported revenue grew more slowly in 2018 than 2017 so the increased ARPU is in part a result of users growing more slowly than monetisation. While this is the right balance commercially, Spotify also needs to grow ad revenue more strongly.

Churn up on an annual basis

Following a peak of 5.8% in Q2 18, Spotify brought quarterly churn rates down, first to 5.6% in Q3 18 and then 5.3% in Q4 18. However, the cumulative impact of churn throughout the year was an annual churn rate of 19.8%, up from 18.1% in 2017. This in part reflects the effectiveness of promotional trials. These trials open the funnel to new subscribers and have strong conversion rates, but because paid trialists are counted in Spotify’s subscriber numbers, any that do not convert become churned subscribers.

Takeaway: Spotify is having to spread its net wider to maintain subscriber growth.

Profitability has arrived but investment is needed for long term growth

Spotify closed off 2018 in style, adding higher than expected numbers of both subscribers and ad supported users. Also, profitability is on the horizon - Spotify generated a quarterly net operating profit of €94 million in Q4 18 compared to a quarterly loss of €87 one year previously. Spotify is demonstrating that its business can operate profitably even without flicking the switch on new revenue streams, albeit at a modest level.

Longer term revenue growth will be dependent on a two pronged approach of accelerating subscriber growth in big music markets that are later entrants to streaming – Germany and Japan – while continuing growth in large mid-tier markets like Brazil and Mexico. It also needs to continue its investment in ad infrastructure. Ad revenue is not growing fast enough, nor is Average Advertising Revenue Per User (AARPU), up just $0.15 in Q4 18 compared to Q4 17. This is an increase of just 3% compared to the 26% growth in ad supported MAUs. Spotify understands the importance of building its ad supported business and is investing heavily in ad technology and sales infrastructure. This needs to continue. But it will look to big radio markets  (e.g. the US, Australia and the UK) to drive mid-term growth, not emerging markets as those territories do not have strong enough digital ad markets. So expect AARPU to be hit as free user bases grow in emerging markets.

Takeaway: All in all, a solid quarter for Spotify but with enough softening metrics to suggest that 2019 growth will require more effort than in 2018.

NOTE: these findings form a small portion of MIDiA Spotify Q4 Earnings Report which will be available to MIDiA subscribers next week