COVID-19 was always going to have a significant impact on the music business, and with the Q2 results for all of the major music companies now in we can start to look at just how big that impact has been so far. Year-on-year (YoY), combined major label recorded music revenues fell by 7.8% on a current currency basis while major publisher revenue fell by 1.6% over the same period (though slow reporting for income such public performance means that the full impact on publishing is yet to be seen). The figures in themselves are disappointing for an industry that has grown acclimatised to growth but the factors driving this are global economic and health policy ones. As we identified back at the start of June, income streams such as physical, public performance and ad supported are all vulnerable to lockdown impact. The only truly resilient revenue source so far is paid subscriptions. The dependency on streaming has never been higher but there are questions here too. 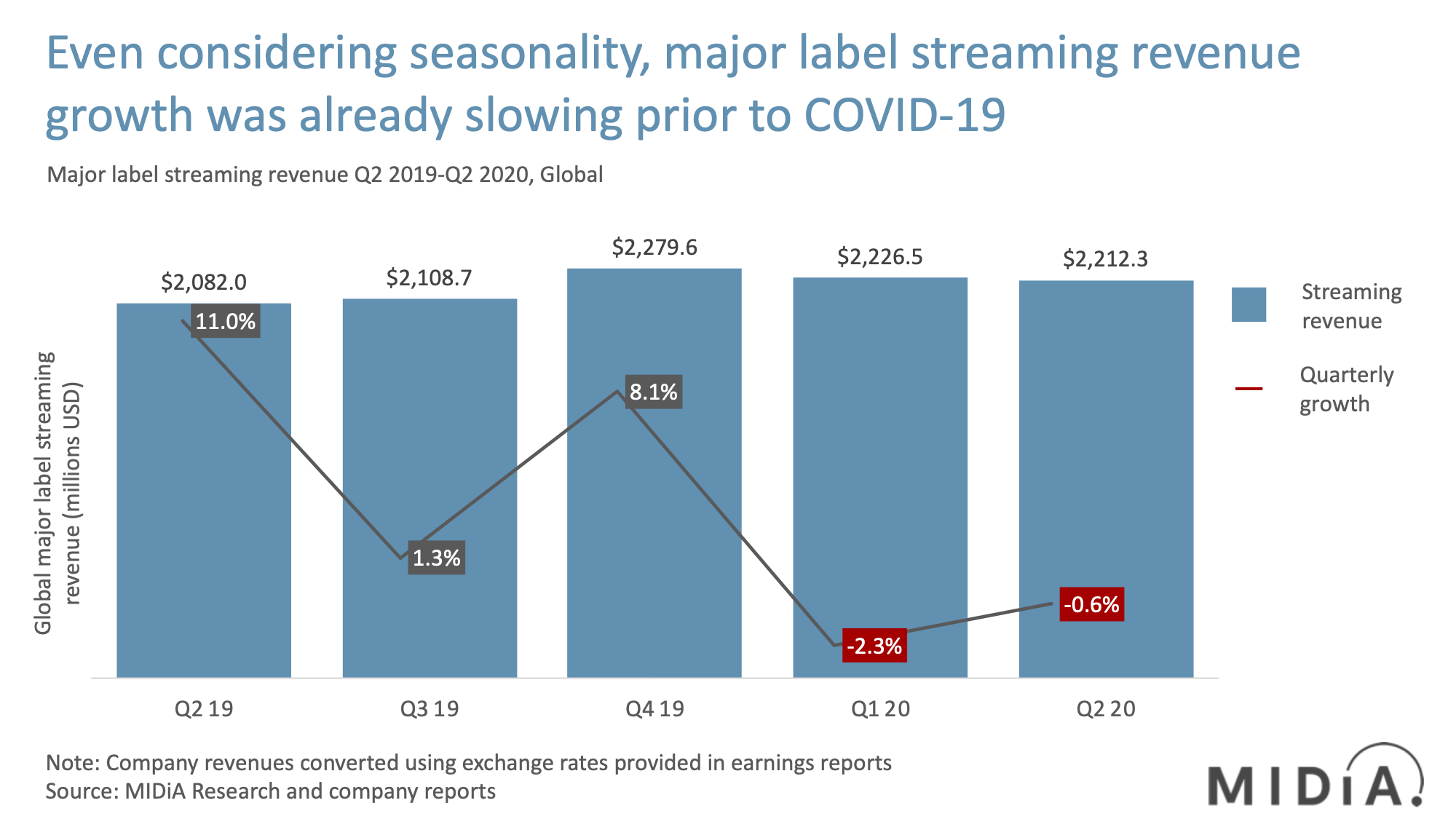 Major label streaming revenue fell by 0.6% in Q2 2020 compared to the previous quarter. Although it was up YoY by 6.3%, (and even allowing for seasonality), there was already a clear slowdown in growth before COVID-19 kicked it into reverse. When markets mature, the margins between growth and decline are small. So, factors such as the weakening digital ad market pushing down ad-supported revenues can be the difference between being in the red or in the black. The music business is going to have to get used to ad-supported under-performing because advertising is always an early victim of recessions.

Despite all of this gloom, the likelihood is that by the end of the year, there will have been sufficient return to growth in many sectors and regions, meaning global recorded music revenues will be higher in 2020 than 2019 – not by much, but up nonetheless.

However, the streaming slowdown emphasises just how important it is for the industry to establish a series of potential plan Bs to streaming’s plan A, and fast.

Q2 2020 wasn’t bad news for everyone in streaming. In fact, Spotify actually increased its revenues both quarter-on-quarter (2.2%) and annually by 13%, i.e. double the rate the majors grew their streaming revenue. The result is that by Q2 2020, Spotify’s total revenue was only 5% smaller than the entire major labels’ streaming revenue combined. All this was despite Spotify’s ad-supported revenue falling by 11%. Spotify’s revenues are slowly but surely becoming uncoupled from that of the majors. Although factors such as timing of revenue recognition and payments to rightsholders will play a role, the key inference is that independents grew faster than majors on Spotify in Q2, continuing the 2019 trend. Although, the term ‘independent’ is becoming progressively less useful as the market internationalizes; in addition to independent labels and artists we are seeing growing impact from regional, non-western ‘majors’ e.g. T-Series, India; Avex, Japan; YG Entertainment, South Korea.

The three key takeaways from all this are:

1.     Streaming revenue growth was already slowing. COVID-19 shows us just how important it is to push new growth drivers

2.     Spotify is already working on its new growth driver (i.e. podcasts) and though the slowdown in the digital ad market will dent momentum, podcasts will further decouple Spotify revenue from that of the majors

3.     The more likely scenario remains that streaming and label revenues will pick up before year end, but if the recession deepens and swathes of millennials lose their jobs, then subscription revenue could be hit, which brings us back to takeaway #1

by Mark Mulligan
16 Jul 2020
Spotify’s delayed Russia launch finally happened this week . While it did not drive a stock price growth like the Josh Rogan deal did (the stock closed just 1 cent higher than the previous day’s close)…

by Tim Mulligan
19 Jun 2020
Back in 2007, Netflix made its famous pivot from being a subscription postal DVD rental provider to becoming an on-demand video streaming provider. Fast forward 13 years and the entire TV industry has…

by Mark Mulligan
8 Jun 2020
The ‘broken record’ streaming debate that continues to rage on is a natural consequence of the instantaneous collapse of live music revenue following lockdown. As soon as it was clear that live was…
No thanks