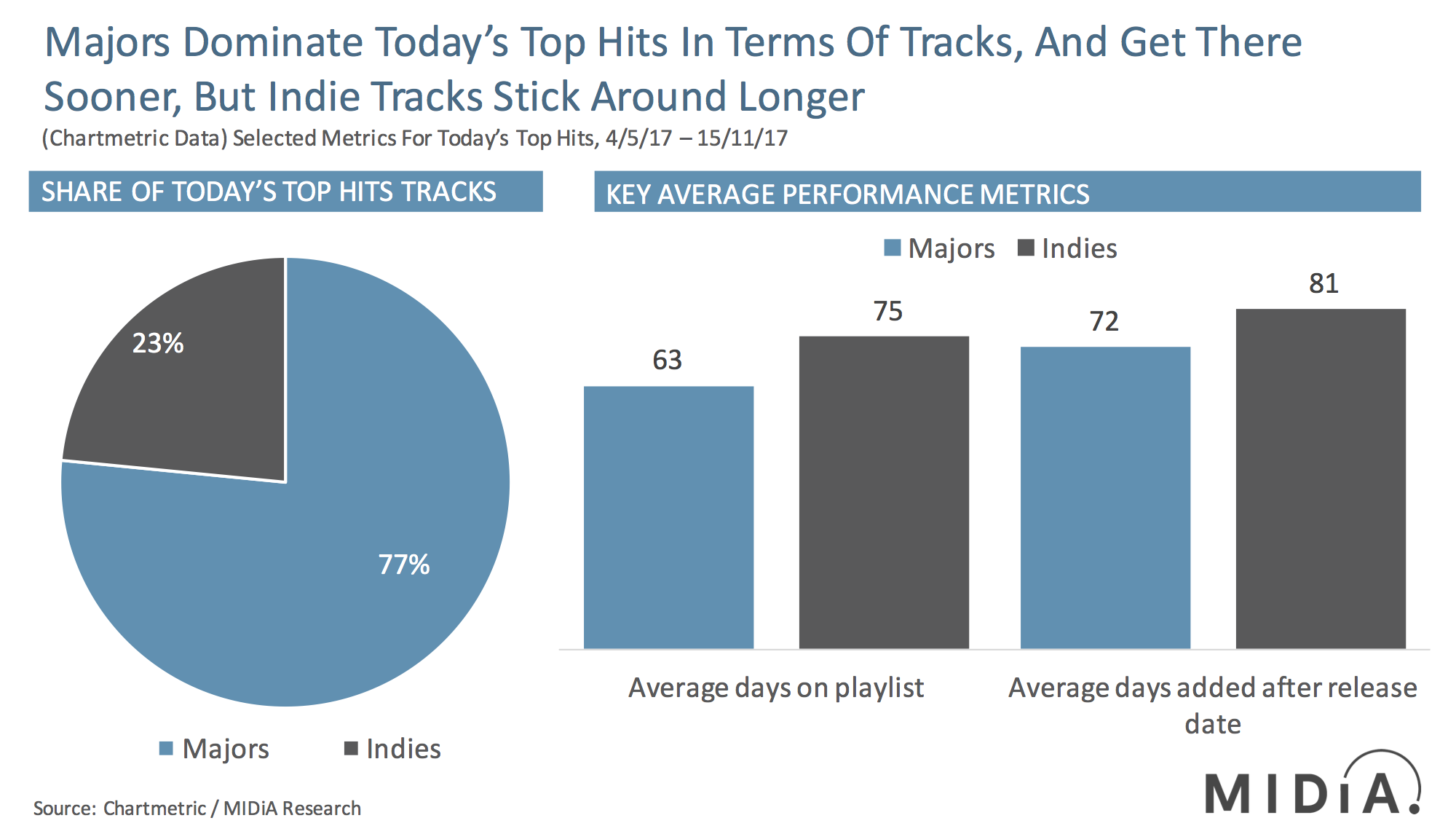 A post by Chartmetric’s Sung Cho diving into Spotify playlist metrics caught my attention, and one aspect in particular: how the major labels dominate the flagship Spotify playlist Today’s Top Hits. Sung was kind enough to share the underlying data with me so that I could dive into it in a some more depth. Major record label artists accounted for 77% of all tracks in Today’s Top Hits between May and November 2017. In the latest week of data available the share rose to 78%. This compares to a recorded music market revenue share of 69% for the majors in 2016 and a 72% streaming revenue market share. Major label artists thus get a larger share of the tracks in this flagship playlist compared to their market share. This apparent advantage is doubly impactful. A playlist like Today’s Top Hits is more likely to be listened through by its listeners, so the higher share of tracks a label has there translates into a higher share of plays which will ultimately contributes to a higher share of revenue which will then be used to justify a higher share of tracks, and so the process starts over.

Some majors though, do better than others. Universal’s streaming revenue market share in 2016 was around 30% yet it got 43% of the tracks in Today’s Top Hits over the period. Sony got 20% against a revenue share of 23% while Warner got just 13% against a 2016 revenue share of 19%. Of course, there are many caveats, not least of which is that the strength of a label’s release roster plays a big role in determining which tracks make it on to Today’s Top Hits. Which means that Universal could be doing a particularly good job of creating frontline hits that do well on streaming.

Indies over-perform against the odds

On the surface, indie labels would appear to have the dice stacked against them. A 2016 streaming revenue market share of 28% translates to a 23% share of the tracks on Today’s Top Hits. Additionally indie label tracks take an average of more than one week longer than major labels after release before Spotify adds them to the list. (The major label average is actually skewed up by a single track which was 4.5 years old when added. If that outlier is removed then the difference stretches to a full 2 weeks less time on average for major label tracks to get on the playlist compared to indie label tracks.)

Yet despite the relative double disadvantage, indie tracks stay on Today’s Top Hits 12 days longer than major label tracks, which is probably a reflection of the fact that so many have to prove their worth to get on the playlist and are therefore more likely to have more staying power than an unproven track put on the playlist immediately upon release. In fact, 13% of all Today’s Top Hits tracks were put on the list the day of their release which begs the question how they can be defined as hits if no one has streamed them yet…