In a locked-down world now dominated by home entertainment, the traditional video streaming subscription giants Netflix and Amazon are up against direct-to-consumer (D2C) entrants Disney+, Apple TV+, HBO Max and Peacock domestically. While Netflix is the moving target against which the newcomers are benchmarking their own performances against, Amazon Prime Video is potentially the biggest threat of all. This is due to its unique ecosystem play as the biggest global winner of the pandemic; just as Google has inserted itself into the public consciousness as the go-to for web search, so Amazon has become the verbal shorthand for e-commerce. As such, its video streaming service included as part of its Prime delivery service is now being discovered by a larger funnel of potential active users.

Front-lining the content offerings available in its library are Amazon Originals, led by its reboot of the Jack Ryan brand created by writer Tom Clancy. Lavishly produced (at a cost of $8 million per episode), season two was released in October 2019 and was heavily promoted by the Prime marketing team. It thus provides insight into how awareness, viewing and fandom all interact to create measurable performance return on investment (ROI) for the show. 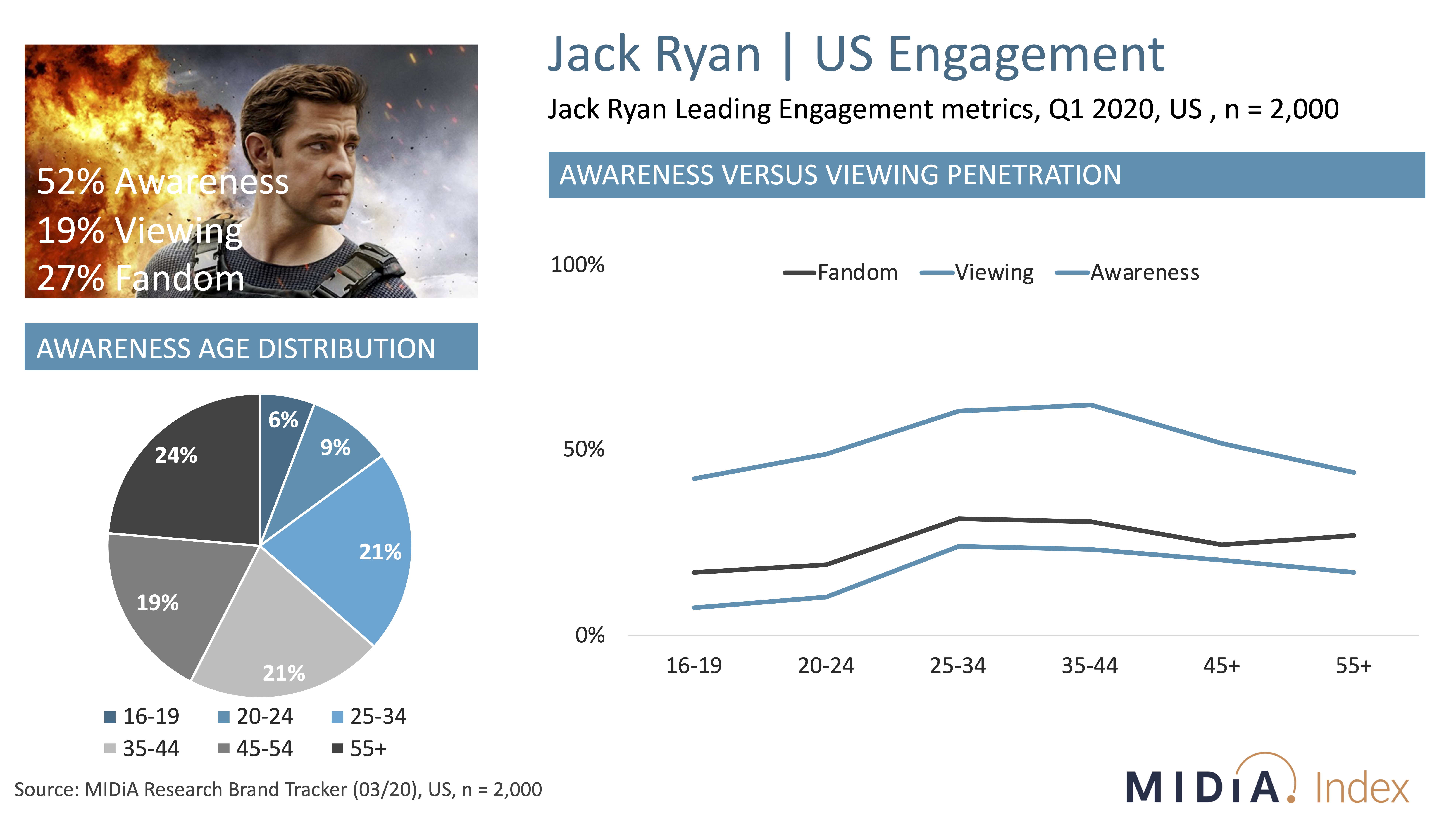 In the streaming era, the old-world reach metrics of traditional ratings no longer apply. When on-demand viewing is both mainstream and device agnostic, measuring the number of people in front of a TV screen no longer provides a definitive understanding of content ROI. Both operators and advertisers need to understand the level of engagement, and that now means fandom.

Fandom is a direct output of awareness converting into viewing, with the adjacent value of sentiment. MIDiA measures this by asking survey respondents to personally grade their level of fandom for a particular show. As the above metrics show, fandom for the Jack Ryan franchise is higher than viewing because of the brand equity which has been built up since season one alongside the Q4 2019 release of season two (the survey was conducted in Q1 2020).

It should come as no surprise that viewing closely correlates with awareness, with viewing slightly under half the penetration rate of awareness for Jack Ryan. This is an average US consumer conversion rate for the shows tracked by MIDiA Research. The greater the awareness, the greater the likelihood of becoming a fan.

To increase the likelihood of converting awareness into viewing, understanding the demographic distribution of the aware group is key. With 43% of Jack Ryan-aware consumers being aged 45 and over, honing the marketing message to resonate with those older demographics is vital.

The formula behind creating shows that live and thrive in the non-linear scheduling world is simple: awareness + viewing = fandom.

As the world moves into a post-pandemic mindset, on-demand home entertainment has become more central than ever – leading to a return to peak attention as the additional 15 hours of weekly entertainment time gained in lockdown start to recede, and the looming global recession threatens disposable income. Show fandom is now more important than ever before.

by Hanna Kahlert
3 Aug 2020
As the global coronavirus pandemic descended, MIDiA predicted that while tough times were ahead some winners were bound to emerge. With increased time on their hands and few alternatives to digital entertainment,...
No thanks