In for a Penny, In for a Pound…Netflix and the Imminent Pinewood Studio Agreement 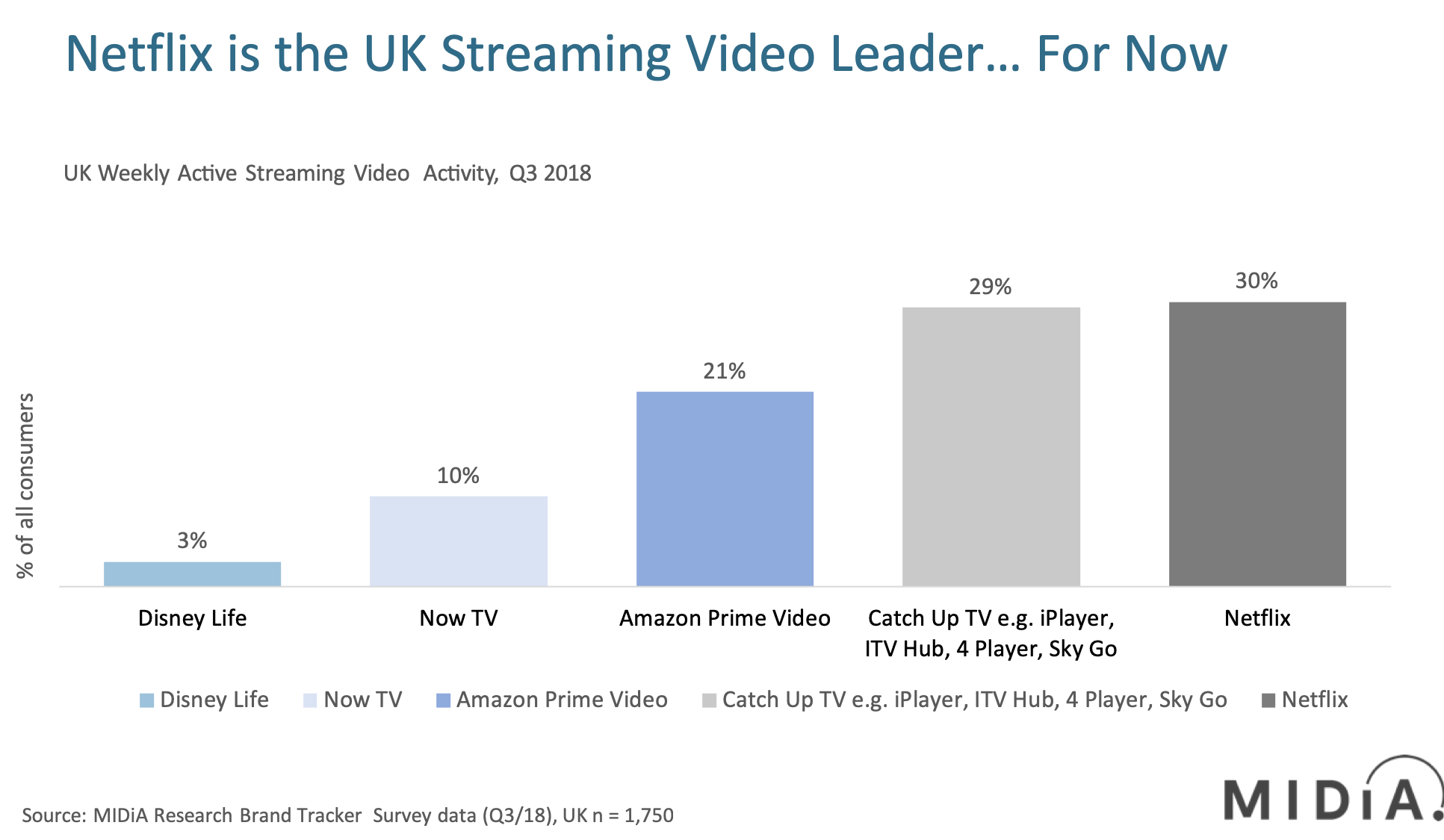 Over the weekend news broke about streaming video on demand (SVOD) global leader Netflix being in advanced stages of its negotiations with the owners of Pinewood Studios (UK), to secure a long-term lease on the facilities. The iconic studios are Europe’s leading film production centre and securing them would represent a strategic victory for Netflix in its on-going battle to maintain its international growth trajectory ahead of existing competitors, as well as new international challengers in the form of Disney+ in 2019. As the above Q3 consumer survey data from MIDiA Research demonstrates, Netflix is now the most widely used streaming video service as measured by weekly active use in the UK. This position has been built up through a combination of Netflix’s early entry to the UK market in 2012 and through its aggressive go-to-market strategy. Netflix actively promotes the service’s primary USP of unlimited access to on-demand content for a competitive contract-free price point, alongside a strong push to showcase the service’s exclusive original content. The net result has been the anchoring in the mind of mainstream consumers of affordable on-demand video streaming to Netflix.

With binge viewing being directly proportionate to the addition of new subscribers to a an SVOD service, Netflix now finds itself in an increasingly onerous position. To retain its expensively acquired subscribers it needs to continue to provide a depth of content inventory that competes with its rivals. However, it also needs to invest in more mainstream content to attract consumers that still predominately watch traditional broadcast TV, hence the ever-increasing content budgets and investment in additional production capacity such as Pinewood Studios.

2019 will be the toughest year yet for Netflix

As a public company and a market leader, Netflix finds itself in the challenging position of being both a market leader in the size of its content investment, and the accumulating cost of that investment. In Q3 alone Netflix had $3.6 billion of non-current content liabilities on its books and total liabilities of $18.3 billion. In 2019 this situation will be exacerbated by the entry of Warner Media’s direct-to-consumer service into its domestic market, while Disney+ will launch both domestically and internationally. Both services are backed by market leaders with access to the financial markets to debt finance content to gain market share, in the same way that Netflix has done to date. Additionally, tech major Apple is likely to launch its own video streaming service as part of a broader content offering, with direct ramifications for a company like Netflix, which is dependent upon third-party billing relationships and infrastructure to deliver its service.

Alongside this increased international threat, the financial markets are becoming increasingly expensive as the macro credit cycle starts to turn and the low interest rate environment of the past decade moves towards a higher cost of servicing debt.

Netflix’s investment in Pinewood Studios therefore represents table stakes enabling it to stay in the next round of streaming video disruption commencing in 2019.