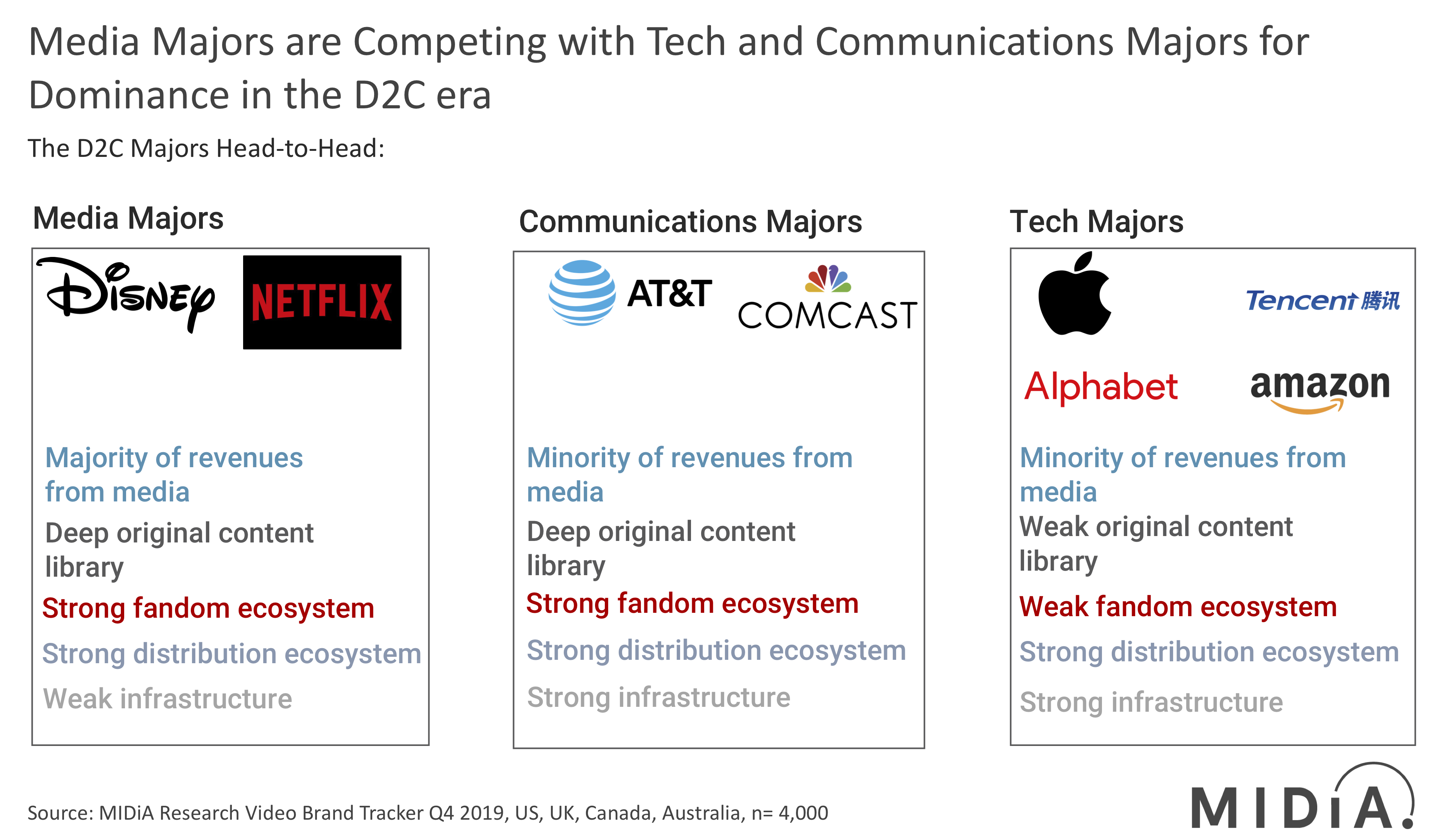 While the previous two months of pandemic disruption has had a dramatic impact upon video streaming, the overall direction of travel for video has remained constant, with video streaming remaining the future of TV and film consumption. The current increase in engagement time available to consumer has accelerated this trend. It is also testing the hypothesis of the new D2C disruptors (Apple, Disney, Warner Media, and NBCUniversal) that they can all thrive alongside each other while disrupting subscription video on demand (SVOD) hegemons such as Netflix and Amazon.

The new D2C big bang era unleashed by the launch of Disney+, Apple TV+, HBO Max and NBCU’s Peacock has created clear-cut strategic delineations among both the new entrants and the incumbents. At the core of the delineation is the division between types of parent companies operating the new D2C services. As MIDiA Research’s report on D2C 2020: Media Majors, Communications Majors and Tech Majors Go Head to Head, clearly identifies the three key players in the video streaming space:

The last decade has seen tech disruption fears from the TV operators and TV ratcheted up as they were steadily shaken out of their market-dominance hubris. The seismic mergers and acquisitions activity of the previous decade in media, culminating in 21st Century Fox’s voluntary self-dismemberment, have all been driven the competitive leveraging by tech firms of their closed ecosystems. Both scale and ownership of production, distribution and customer relationships have come to be viewed by the deeply entrenched and capital-rich tech majors as key to competing effectively. The rise of the media majors and the communications majors in particular, have now shifted the frontlines in the video streaming wars away from tech disruption and towards the blend of assets and soft power which is being deployed to build D2C subscriber bases and retain engagement beyond the current binary SVOD/non-SVOD business models.

In Q4 2019 monthly video streaming subscriptions went mainstream with over 50% of consumers in the US,UK, Canada and Australia now subscribing (source: MIDiA Research Q4 2019 Video Brand Tracker.) This has laid the foundation for the biggest shift in video consumption, where previously additive services such as Netflix can be supplanted by substitutive offerings like Hulu/Disney+/ESPN+, which with their blend of news, scripted drama, film, and premium sports can justify consumers severing the pay-TV cord and switching to the streaming alternative. Indeed NBCUniversal’s stated objective for Peacock is for it to replace existing Comcast pay-TV Apps and become the main point of contact for consumers of NBCU content.

The competitive positions for the tech, media and communications majors are about to be put to the test in 2020 and reshape the streaming-first direction of the TV and film industry for this decade.

The COVID Bounce: How COVID-19 is Reshaping Entertainment Demand

by Mark Mulligan
27 Mar 2020
The economic disruption and social dislocation caused by the COVID-19 pandemic is not evenly distributed. Some business face catastrophe, while others thrive. Across the entertainment industries the same...

How COVID-19 Will Affect the Media Industries

by Mark Mulligan
23 Mar 2020
The spread of COVID-19, and the responses of industry and governments alike, is unprecedented. It is, however, the restrictions on movement of people along with the response of consumers and investors...

by Dara Jegede
16 Apr 2020
COVID-19 is having a clear and direct impact on the entertainment and media industries, driven by investor uncertainty – resulting in plummeting share prices – and restrictions on movement of people...
No thanks