Disney+ Has Tapped the Cultural Zeitgeist with the Mandalorian 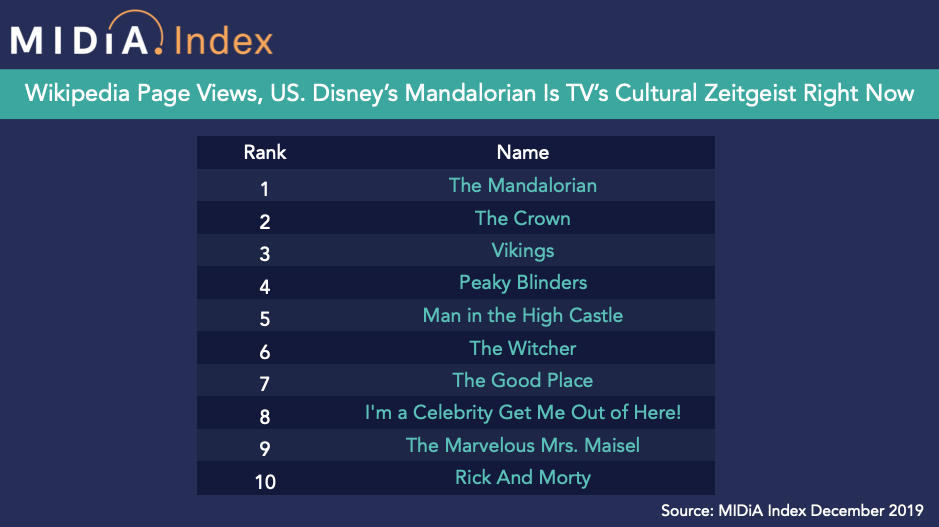 With 10 million sign ups in its first day, there is no doubt that Disney+ has tapped strong latent demand in what is already a highly saturated US streaming video market. What differentiates market insurgent Disney+ from incumbent Netflix is that it is trading on big individual brands, many of them decades old. Netflix, on the other hand, pushes its brand as a utility first, and shows second. Shows like Stranger Things are an exception rather than the rule. In fact, Netflix has a track record of showcasing just a small number of show brands at any one time, with House of Cards and Orange is the New Black previous examples. What is more, Netflix is ruthless about killing off shows as soon as they start to peak.

Neither of these strategies is inherently more right or wrong than the other, but instead reflect opposing worldviews. One is the traditional playbook of studios; the other is the more recent playbook of digital platforms. The likelihood is that both approaches resonate with different types of audiences and that both streaming services will borrow from each other’s approach as 2020 unfolds.

Right now though, Disney’s approach is gaining mindshare. Nowhere better is this illustrated than with The Mandalorian. By building a series around a cult and underexposed character in the Star Wars universe, it had already stirred up interest before release. Weekly episodic releases have amplified that audience sentiment by creating a sense of scarcity and leaving fans to fill up the digital ether with discussions, memes and plot theories while waiting for the next instalment. Meanwhile, ‘Baby Yoda’ was a creative master stroke, creating something genuinely unique around a well-loved character and something that is eminently meme-able.

The impact on audience demand and interest is palpable. Looking at the list of top TV show Wikipedia pages in the US from MIDiA’s Index service, the Mandalorian is top for the first week of December. While Google searches are lower ranked (12th), Wikipedia is a unique measure of audience intent. It is the step beyond simply looking for the show; it reflects audiences wanting to go that step deeper to find out more.

Disney+ may only just be getting going, but in terms of creating a cultural zeitgeist, it just won the first round. Your move Netflix.