Behind the Hype Cycle: Venture Capital as the Modern Fountain of Youth 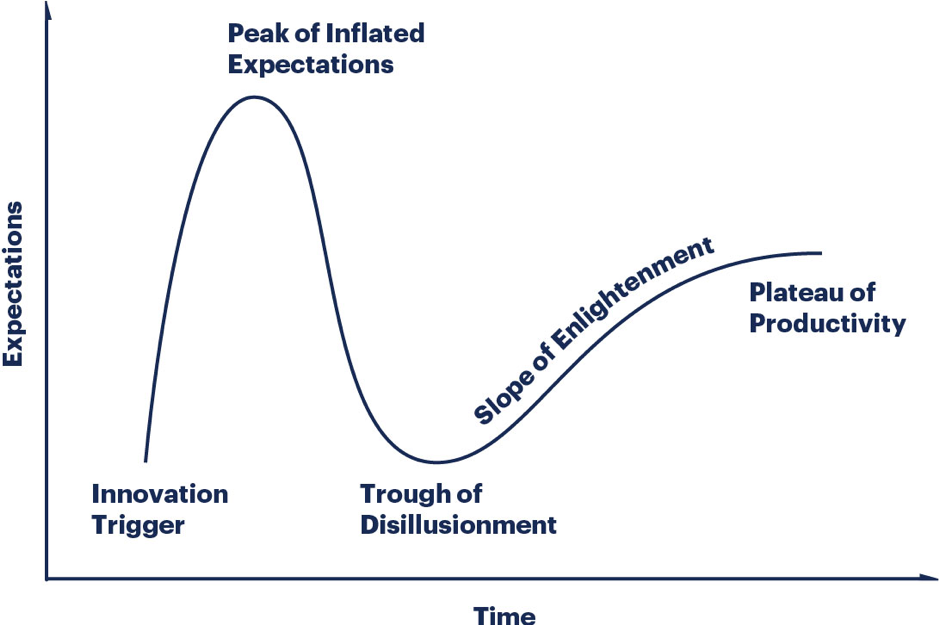 When the Ichthyophagi showed wonder at the number of the years, he led them to a fountain, wherein when they had washed, they found their flesh all glossy and sleek, as if they had bathed in oil - and a scent came from the spring like that of violets. The water was so weak, they said, that nothing would float in it, neither wood, nor any lighter substance, but all went to the bottom. If the account of this fountain be true, it would be their constant use of the water from it which makes them so long-lived. - Herodotus

The fountain of youth was first conceived by the  ancient Greek historian Herodotus back in the 5th century BC, referring to the Macrobian people and their use of a mysterious source of  vitality. Through bathing in its water, the average Macrobian was said to live until the age of 120 and the people were described as the ‘tallest and handsomest of all men’ (Source: Ancient Greek Tinder). Herodotus would not be the only person to explore the mystical concept of the fountain of youth. Such is the power of the imagery that many cultures throughout history have had their own version of the story, with a rejuvenating source regularly appearing in Christian iconography and the Spanish conquistadors account in the 16th century, where, according to legend, the Spanish heard of the island of Bimini from the Arawaks in Hispaniola, Cuba, and Puerto Rico. The Caribbean islanders described the mythical land of Bimini as a place of wealth and prosperity, which became conflated with the fountain legend. This was then explored by Ponce de León in the 16th century hoping to find the mythical source of eternal life and potency. The legend has carried through culture and serves as reminder that our idolatry of youth is not exclusively a modern predicament.

Given that the Macrobian people are now widely believed to have been mythical, the story of the fountain of youth should be viewed as allegorical for the value that humans place on the new. Studies in evolutionary biology reveal that our natural tribal instincts have a bias weighted towards new information because if something seems unsafe in previously hospitable terrain, it is a matter of life and death if we get it wrong. This is also a mental hangover from an era when information was scarce. Liberated by modernity from those concerns, and in an era where we are at the same time in a Faustian bargain between a desire for knowledge yet confronted with new information all the time, our innate proclivity towards what we have heard recently means we regularly overvalue new opinions that distort our thinking.

There are several everyday examples of this. People of different generations wax lyrical on how previous decades yielded better music, but a swift google of the billboard top 100 charts during weeks of the 60s reveals a glut of forgettable artists and songs in the top 20. Yes, the Beatles and Stones are there, but so are Wayne Fontana and the Mindbenders. The same logic can be applied to the latest diet fads (the low-fat craze of the 90s), fashion (flares, crocs), etc. Put simply, time is an excellent sieve through which to filter ideas.

Applying this to tech and investment, tech industry observers will be familiar with Gartner’s hype cycle. Gartner define their hype cycle in 5 stages:

Perhaps the model can be best surmised by a quote often attributed to Bill Gates, ‘We tend to overrate ideas in the short term and underrate in the long-term’. Clearly we overvalue the new, but the new can only prosper in an environment that allows it to do so. This begs the question: where is the fountain of youth in modern tech?

You need not explore the coast of Florida as Ponce de León did in the 16th century to find the fountain of youth (although you may however find Soundcloud rappers). New business ventures require money, and historically finding that meant going through relatives or to a bank (for an account of how demoralising start-up funding could be prior to the advent of Silicon Valley, read Nike founder Phil Knight’s Shoe Dog).

Businesses are therefore like any new organism. Whether a microbe or a new-born human, new entities are vulnerable and require a hospitable environment early on in their lives.  The financial climate of the past 10 years has been especially amenable for start-ups. Historically low interest rates has meant new money, the rise of the start-up culture, and a VC bubble that has meant cheap access to capital has effectively become the modern era’s fountain of youth. While certain productivity metrics have never recovered from 2008, we are regularly bombarded by financial media stories of all-time highs in the stock market and record low unemployment. However, this enthusiasm should be tapered by a few statistics:

Good news, right? The problem is that the majority of those start-ups are feeding on cheap capital, not generating that value themselves. This does not affect the wider economy in the short term because people in those jobs receive wages as they would from any employment and then go and spend that money as they please across the wider economy. The question is, what happens when this period ends, and start-up culture is forced to be conservative in growth projections rather than continue to freely haemorrhage capital?

Returning to the fountain of youth, our idolatry of the new again steals the show in modern business. Every start-up founder is cast in the Zuckerbergian archetype – think Forbes 30 under 30, Hollywood, Silicon Valley – the totems of our cultural gaze are, more often than not, young. The warning signs are already there from new media. A few short years ago BuzzFeed, Mashable and Vice were the darlings of the new media revolution, regularly courting valuations in the billions. A few months ago, they were cutting staff with major investors effectively writing off their contributions. The new (cryptocurrency AI) is now garnering the most in VC investment because it is untested and thus limitless in potential. This again distorts our thinking when it comes to start-up investing because being incubated within major cities not only clusters political thought, it often makes us incognizant of how much older our populations have become in recent decades. These audiences are harder to crack when it comes to new technology. Given the average higher net worth of older consumers, the most valuable advertising cohorts are concentrated within this medium. Not only that, but this group is often slower to adopt new technology than younger users. For context, while fast growing, only 4% of the US population has used Twitch. Radio disruption will look very different to CD disruption, as CD’s were mainly purchased by younger people. Radio, meanwhile, has an audience with the habit engrained over decades.

This is not to fully discount the value of the new. If the new falsifies that which comes before it then it is extraordinarily valuable. Karl Popper’s logic that ‘Not all white swans prove all swans are white, but the appearance of one black swan does disprove that statement’. Instead, what Gartner’s hype cycle and considerations of demographics do for conversations around tech investment is allow us to overcome our innate bias around the shiny new thing and consider its underlying fundamentals: what problems does it solve, and does it provide a significant improvement on previous technologies?

While there is no exact methodology for how these bubbles come back to earth, it is worth remembering that the myths surrounding the original fountain of youth rarely ended well. Sequene, an Arawak chief from Cuba who was purportedly unable to resist the lure of Bimini, gathered a troupe of adventurers in a quest to find the restorative fountain and sailed north. He would never return. Investing trends around the new, from the south-sea bubble which seduced even the most prudent minds of the time (Isaac Newton no less lost a considerable amount of his fortune) to the dot-com crash, will continue to affix any risk taker with dreams of avarice. Until then, given this is MIDiA, Bob Dylan’s work as an economic prophet carries resonance for the VC bubble and the start-up nation it has engendered: